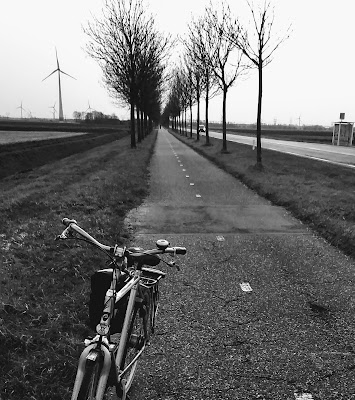 Flevoland, the Netherlands' 12th and youngest province, is generally given short shrift in travel guidebooks, as it has few genuine "attractions" other than the former islands of Urk and Schokland, both of which were incorporated into the land mass that became the Noordoostpolder in the mid-20th century. But in fact the flat expanses of Flevoland harbor a unique set of nine "land art" installations that exploit the possibilities of the landscape as a medium, while some reflect on its history. I've already seen the Green Cathedral, now I wanted to see the others. They provided a perfect pretext to explore. So I worked out an itinerary where I could visit one or two per ride, then park my bike at the nearest train station. I started by cycling from Amsterdam to Almere, the province's westernmost city, with a couple of land art pieces within cycling distance, found another amidst the vast polderland, then two more near the town of Lelystad.

Following the first snowstorm in a decade, it turned crazy beautiful, so I decided to embark on a new bike-train tour, starting in Flevoland.

The way out of Amsterdam I took the Nescio bridge to IJburg and traversed Diemerpark to the Vijfhoek — the pentagonal nature reserve that juts into the IJmeer. It felt like it had fast-forwarded to spring, and the greenway to Muiden was already open. Past Muiden I continued along the LF-9, skirting the IJmeer to Muiderberg. There I found one of the country's oldest Jewish cemeteries — closed, as it was Saturday.

Beyond Muiderberg was new territory for me. I had never cycled all the way to Almere. It was a question of climbing the bridge (→ 26). The bikeway on the bridge was as broad as a car lane, a pleasant ride between the IJmeer and Gooimeer. Arriving in Flevoland, I headed up the west edge of the province in search of the next work of land art. This was a lovely ride, first past the beach of Almere Poort, then a seaside jaunt up to the northwest corner of the province and around the bend. 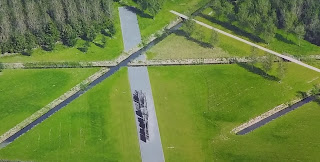 Land Art 2: Polderland Garden of Love and Fire (1997) by Daniel Libeskind. This series of aluminum monoliths is one component in a sort of pictograph, comprised of five lines, as seen from above; the other lines are formed by 3 slender canals and a footpath. Apparently the artist was inspired by "Llama de amor," a poem by the 16th-century Spanish mystic Juan de la Cruz, though how these passions are reflected by the polders of Flevoland I couldn't say.

Today's ride was splendid. About the first half was along the Lage Vaart, a broad canal that skirts Almere's lengthy eastern extension: Almere Buiten. Almere is a large town. Almost the entire way the path was full of people: families out strolling, cyclists on this unseasonably warm Sunday. Past kp 71 the urbanization ends and the path parallels the train tracks along the bottom edge of the Oostvardersplassen reserve. At kp 6, I turn around, climb up to a lookout over the reserve, where crowds are having ice cream from a truck, and go south over the A6. 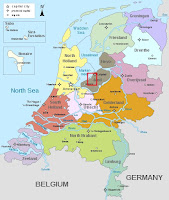 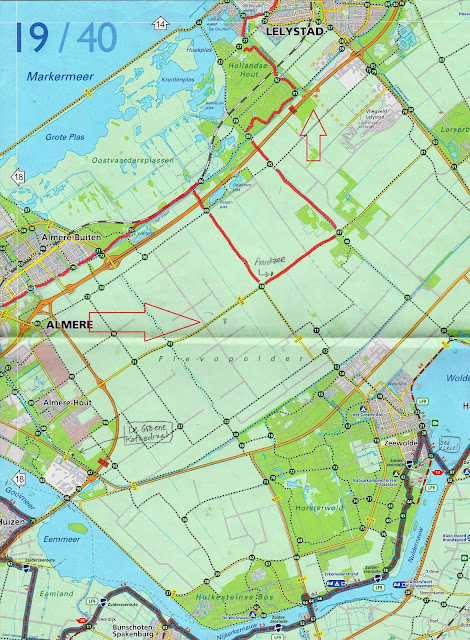 Thus begins the one arduous stretch of the day, riding down a flat road flanked by a series of eolic windmills. The line of trees that mark the turnoff seems impossibly distant, though it's just a little over 4 km, going against the wind. But eventually I reach it. As soon as I turn onto the broad asphalt path alongside the N706, it's a pleasure once again. About 1km east is the installation on the left.

Aardzee (1982, Piet Slegers) — "Earth Sea"  — is a sort of homage to Flevoland's not-so-distant watery past beneath the Zuiderzee. The 5 hectare artwork consists of a series of embankments alongside a still canal traversed by 2 footbridges. The sloped green protrusions might be seen as rolling waves. In a sense, the entire landscape of Flevoland is a work of art, as it was created from nothing, and Aardzee blends right in. If there weren't a sign you might not notice it. Before inspecting the installation, I sat at a picnic table and ate my sandwich. A geezer came over — the only other person in sight — and commented on the lovely weather. He said he could recall when the site was being built. A photo shows it being dredged from the water.

I continued east and now with the wind pushing me along, it was pleasant indeed. I had thought of going as far the Larserbos and heading north along the Larservaart canal. But instead I went north at kp 47. Looking over the stark landscape and noticing a biking couple gliding onto it, I decided to do the same. This jaunt turned out to be splendid, as pleasing to the senses as the way down was annoying and monotonous. Yet it was around the same distance. Nothing but a vast swatch of green, power pylons to my left beyond a fringe of reeds. Eventually the highway came into view and I plowed under it to reach the Hollandse Hout. 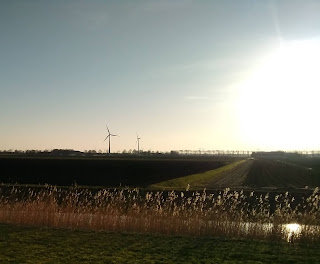 I had been to the Hollandse Hout but got a different perspective on it today. Not exactly dramatic but splendidly remote. I took an L-route through the forest, which now seemed scrawny and straggling. None of the majesty of the Veluwe but somehow comforting. It was a perfect day capper.

On the Bataviastrand at Lelystad. Slightly cool but fine beach weather. This dramatic setting is at the foot of the Houtribdijk — the 27km causeway to Enkhuizen in Noord-Holland. Perched on a spit of land on the southwest end of the beach is Exposure man, exposing himself I guess, to the sea: the Markermeer. It is Land Art object #4, the creation of British artist Antony Gormley. He certainly is a photographable chap; I've taken shots of him from every angle and distance. He pops out of the landscape, far or near, a crouching figure. He is a 26m tall construction of what appear to be pieces of power pylons. Not a straight line to be found — it is all shapes formed by placement of steel bars at suitable angles. I took a small section of the Houtribdijk — installed between 1957 and 1976 as part of the Zuiderzee reclamation project — just to see how it felt. With the wind at my back it seemed calm and I contemplated just riding to Enkhuizen but didn't. I'm sure it would be pleasant and not monotonous, something like a sailing trip. If I were to take the causeway to Noord-Holland, I could head down to Alkmaar or over to Den Helder. The wind must be blowing northwest for maximum fun.

After Exposure, I headed up the coast to kp 40. The coastal path felt pleasantly remote. It was great just to ride and look at the occasional eolic windmill or shipyard. At kp 78, I hauled the bike up over the dike (stairs with rail) to find the highway in front of me (A6). Climbed deftly over this and proceeded south through polder — like yesterday but less daunting. Reaching a T (kp 74), I turned right (west) to kp 80. There stood Land Art item #5: Observatorium. 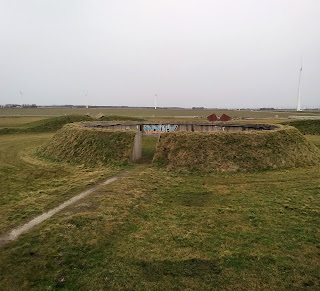 There was no one around. The piece dates from 1977 and was created by Robert Morris, who is according to a New York writer friend, "along with Donald Judd one of our greatest minimalists ... an integral part of the NY art scene, this guy worked in almost every medium but was known for installation and performance."  When it was transplanted from Velsen (North Holland) to its current location east of the city of Lelystad in 1977, the province of Flevoland had just been reclaimed from the sea and there was plenty of room for such a mega-project. Now it stands in a triangle between roads and railroads, dwarfed by numerous eolic windmills. It consists of a pair of concentric donuts; from the inner one the sunrise can be sighted through a sort of stone viewfinder on solstice and equinox days. On the explanatory board, it is compared to Stonehenge, but it made me think of the Maya observatory at Uaxactún, Guatemala. It was neat but a little rundown, the boards that lined the interior circle covered with graffiti.

Rather than return to Lelystad, as I'd originally planned, I continued east as far as Dronten — at 14km, a reasonable distance to cover in the hour of light that remained. By going further east, I had an easier ride to my next destination, Kampen. I was cycling along a backroad, wind pushing me along, and I soon reached the burg of Swifterbant, where I was pleased to find an Albert Heijn supermarket, and I got water and chocolate.

Then I was on a busier road to kp 87, where I turned south through vast fields, seeing no sign of a town. Some confusion over unposted signage, then I was gliding down most smoothly into Dronten, fietspad along a well-lit thoroughfare flanked by identical modern dwellings, each crowned with an A-shaped studio. This was a prosperous, ultra-planned community in the middle of nothing. Dronten has a population of 40,000. It is the world's chief manufacturer of Velomobiles, or human-powered cars.

Over a highway and into the center, which was rather lively. It was a mild evening and I didn't mind waiting on the platform for half an hour. Dronten has an ultra-modern station with ample protected parking. That is a key element is this bike/train approach, and with just a couple of exceptions — Harderwijk, Hilversum — I could always park under a shelter. Continued...