Late summer tour. Pretty day with giant clouds drifting through blue skies. I took the train to Lelystad, which is the town on the other (east) side of the Oostvaardersplassen, less than an hour from Muiderpoort.

I headed south, then west (to kp 92), a long, straight, flat, featureless road, to the Hollandse Hout. But the woods were a disappointment. Disobeying the signs ('verboden uitgezond werkverkeer'), I headed south toward kp 91. This looped around along an unsurfaced path where sand mining operations were going on, and the principal features were big piles of sand. I encountered one worker who seemed surprised, though not perturbed, to see me. I came out on a paved road--no knooppunt marker.

I went back through the sand hills, only to find that I needed to take the same paved road to kp 20. This turned out to be a stretch of blacktop between the patches of forest. But things picked up from there and it turned out to be a genuinely scintillating tour.


(original date of this entry: Sept 2, 2019)
kp 20 -> 23 -> 24
At the end of the road you turn right on the LF-20 and the Knardijk. A little ways up is the visitor center for the Oostvaardersplassen. Closed Monday, but the walking trails were accessible. I took a short hike past a small lake to the start of a canal spanned by a pair of wooden bridges. Didn't see any birds but it was pleasant to walk around.

I then continued up the Knardijk, a long, elevated fiets expressway beside a brick surface road for cars. To the left the expanse of the wetlands reserve, to the right the Hollandse Hout. I descended to the latter to sit at an isolated picnic table and read A Clockwork Orange. I then continued along the dike until the end, the Markermeer. Here I turned right, wind driving me most pleasantly toward Lelystad, alongside auto traffic.


kp 24 -> 25 -> 30 -> 33
I then flew to the harbor zone. The first place I encountered was a sort of great open square with a giant white head in the center, upon which stood an explorer. The face of the big white head had vaguely Asian features. Just beyond this stood a modern outlet mall full of designer shops, most of which were empty. A few groups of youths wandered around. I reached the central court, occupied by a McDonald's, and turned around, then proceeded north along the shoreline. I then realized that this was Lelystad's tourism center, known as Batavialand, no doubt an integral part of the plan for this new city. There was a replica of a Dutch East India Company ship, the Batavia, which according to my guidebook sank off the coast of Australia in 1629. Near this were a couple of giant museums, now closed. One of them is devoted to ship archaeology.


It later occurred to me that Lelystad is also the departure point for a bridge across the Markermeer to Enkhuizen, like an inner afsluitdijk, which extends 29km or so.

From this point on, the ride was a non-stop delight. 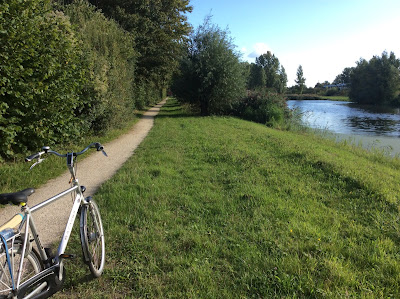 kp 33 -> 35 -> 36 -> 42 -> 43 -> 48 -> 50
Basically a continuous strand of woods. First the Tuindersbos which skirts the north side of urbanization, then toward kp 42 threads north through Zuigerplasbos. On the way out of town I found a divine turnoff--a strand of sand alongside a canal with a sun-drenched lawn for a bank. I sat in the sun and watched swans and ducks slowly glide over the green detritus. 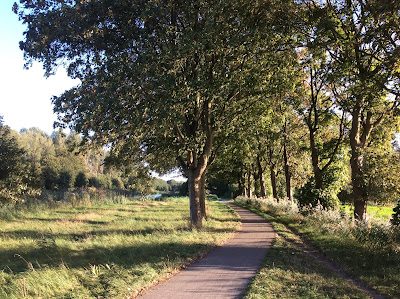 At kp 48 I left the LF-20a (which continues northeast through the polders of Flevoland to the Noordoost polder and the former island of Urk, and onward via Heerenveen, Friesland, to Groningen), and went through the Paardenbos and the Gelderse Hout, down tree-lined paths flanked by fields, then along a canal, the Oostervaart, the whole area left alone though within close proximity to the city. Like Almere, urban planning at its best. 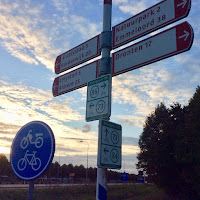 kp 81 -> 86 -> 85
Then I could've cut the tour short and headed west into the center of town but I wasn't tired and there was still an hour or two more of daylight. So to complete the tour I went over the A6 and continued south to the Natuurpark Lelystad. I remember thinking as the pavement ceded to white packed sand, "This is like riding over velvet." The route threads through a series of lakes, with now and then a bench perched at a glorious outlook. The guidebook says that the park contains Przewalski's horses, "the world's last species of wild horse," apparently native to the steppes of Central Asia. I may have seen a few.