The tour of Flevoland continues. I had reached Dronten, the easternmost town in Flevopolder (that being the younger, southwestern component of this artificially constructed province). I struck further east, skirting the railroad, to reach the edge of the land mass, location of one of the quirkier works of land art that formed the basis of my tour. From there I jumped over to the adjacent province of Overijssel and had a tour of the ancient rural landscapes around Elburg before proceeding further east through a splendid riverine landscape to the town of Kampen. Now I was poised for the next leg of my journey, the remote Northeast Polder.

So far, so good. Very easy to leave Dronten. From the train station, I ride up to the N307, then head south a bit, ending up back at the train line (to Kampen). From there, the trail winds gently east along a sort of nature corridor between the tracks and a canal fringed by reeds, the Zwolsevaart. At road/canal intersections, rather than going over or under, the trail circumvents these obstacles. The day is beautiful and a few fietsers, mostly elderly or racers, are out. Trains whiz by now and then. Without really thinking about it, I chose the perfect route east to the Veluwemeer. 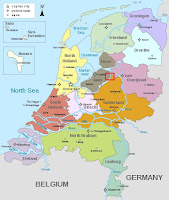 Continuing along the train line/nature trail, before getting to kp 98, I reached the intersection of the Zwolse Vaart and the Hoge Vaart. Here was a small stepped pyramid which may have been inspired by Teotihuacán, with a little observation platform at the top, from which you can take in the slow-moving brown waterways as they meet. It was clearing.
This corridor connects to Het Roggebotzand, a riverbank nature/recreation zone, not only providing a continuous natural strand where species can thrive but a nice way for the inhabitants of Dronten to reach the river by bike. It was certainly a pleasant ride, and the randmeerbossen (riverbank forests) (kp 96 → 42) were a joy. I emerge from the forest onto a bright sunlit road alongside vast fields of plowed dirt. This is not so pleasant but before long I reach Het Greppelveld —a small wetlands reserve that attracts godwit, lapwing, curlew, snipe and corncrake —then the bridge to Elburg. Not far south is the Gransma project. 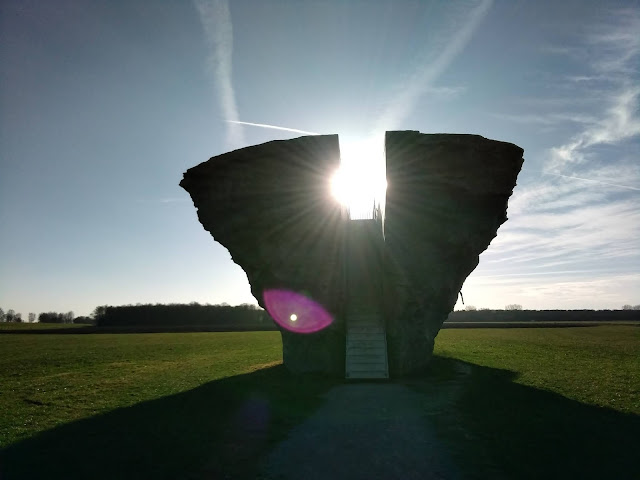 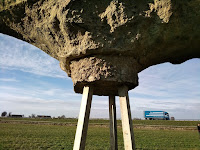 Riff PD#18245 (2018) by Bob Gransma, stands in the middle of a typically vast flat field on the southeast corner of Flevoland's western component, a strange V-shaped mass. This is at the beginning of Het Spijk, a riverside recreation area that stretches down the Veluwemeer to the southwest. The sky is perfectly clear. The massive artwork casts a great shadow before it. I approached and immediately climbed a central staircase that leads to an observation platform, though there isn't much to see  —just the smooth top surface, the flat countryside, the highway. Descending and strolling over to the sunlit side, I could see it in its entirety —a huge, oblong slab of earth supported by stone pillars. The piece was inaugurated in 2018, centennial of the Zuiderzee act, which sanctioned the act of pulling this landmass from what was then known as the Southern Sea and making it inhabitable and agriculturally productive. In homage to this momentous occasion, artist Gransma took 8000 cubic meters of polder dirt and sealed it in concrete, then extracted the dirt filling. The resulting cast stands upon a pair of stone-pillared supports. 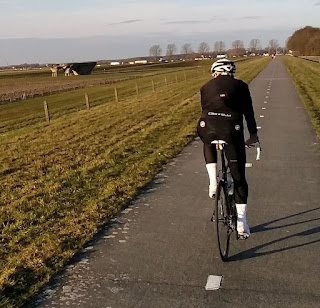 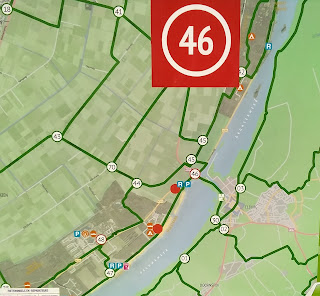 I then took the bridge cross the river to reach the walled town of Elburg thus arriving in the province of Overijssel— then proceeded southeast to 't Harde, at the threshold of the Veluwe forest. About a minute after I parked my bike at 't Harde, the train to Amersfoort was arriving, just enough time to scan my pass. Oops: saldo te laag. This means I am riding from 't Harde to Amersfoort without paying my fare. ... Made it, tee hee!

Today's ride had two components: rolling around the old farmsteads and estates between 't Harde and Elburg, and sailing down the LF-9 to Kampen. 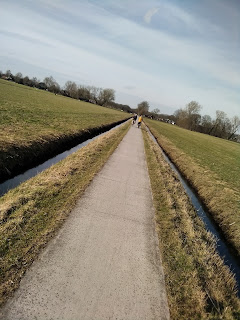 I easily located my bike at 't Harde station, then took the long way round the west side of the village, crossed the N309, which I'd come down yesterday evening, and entered the forest of Zwaluwenburg estate, an old forest (as opposed to the budding ones of Flevoland). There are castles and mansions within.

On the way to Oldebroek I rode through a vast flat field in the sunshine, at points having to make room for the old folks approaching. On the way to kp 4, I looked at an old estate mansion, Landhuis Morren. Here the path becomes an exceedingly narrow country lane.

The modern part of Elburg was dull and full of traffic. I found the old city center and browsed its collection of ancient buildings, then looked at the ramparts —green, with a strand of a path, inviting for a stroll but I kept going.

Immediately I found myself on an elevated dike alongside the Drontermeer —another name for the Veluwemeer/Nuldernauw/Nijkerkernauw, etc, essentially the waterway that separates Flevoland from the mainland—and I was alone. It had cooled down considerably and I donned my coat. (The pre-Indian summer had come to an end.) On and on, cruising along: to my left, across the river, Flevoland —in fact the same woods I descended through yesterday— to my right, flat waterlogged fields crowded with ducks and grazing sheep. I see one of those proto-hens pecking in the grass. Honking geese flying between bank and islets in the river. 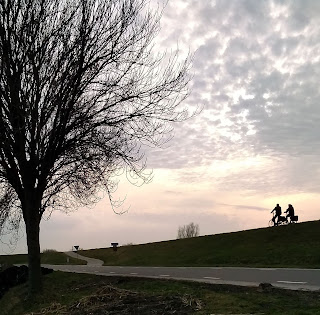 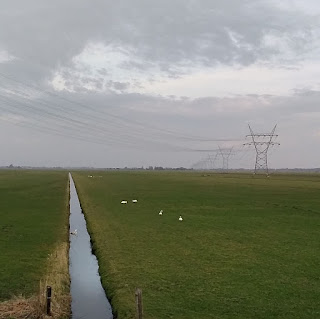 I reach a bend and my view takes in a big lake or marsh bordered by a band of reeds that recede into the distance. It is an impressive vista. Rolling down the lakeside I admire the swampy vegetation and scores of ducks.

Finally I reach the bridge to Kampen (kp 26-69), a modest span supported by stone trestles and somewhat perilous to traverse as the bike lanes are a part of the road and the traffic is regular in both directions. Surprising to find this on the threshold of Overijssel.

There is no signage to Kampen-Zuid station but I deduce from the map that I need to follow the trail toward kp 40 for a bit, then bear left down to a traffic rotunda. Then I am channeled on to a side road, which seems like an ordinary road but is mostly clear. Then I cross the highway (N50) and skirt it north. I see Kampen-Zuid station to my left but cannot access it across the road and have to travel a little ways north, finally see a turnoff and loop around through a newly built neighborhood and roll up at the station, a modern brick structure with plenty of protected bike parking.
So now I've cycled from Amsterdam to Kampen via Elburg. Now the train rides home are longer and costlier. But it's worth it. And the service on the KampenZuid -Amsterdam line is good and frequent. Plus wi-fi.

This frenzy of riding has to do with the fact that I start work next Monday and such long-distance joy rides will be limited to the weekend. The spell of springy weather was motivation enough to ride like hell. Continued...