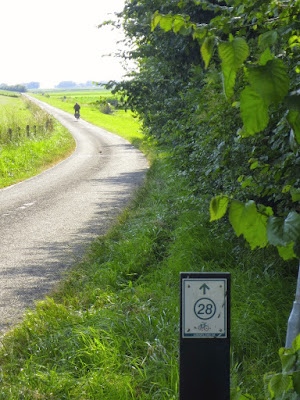 Plans are afoot to install a new network of fast bikeways for commuters, primarily between cities and suburbs. A few pilot routes have already been installed: Eindhoven-Veldhoven in Noord-Brabant; Deventer-Apeldoorn; and Utrecht-De Bilt. To designate these special routes, a new signage element will be added: the letter 'F' (fast I guess) plus the number of the route in white lettering on a blue background. The website of the Fietsberaad shows what these look like.
A number of signage systems are already in use throughout the Netherlands. It can be a bit confusing to visitors, and in fact many Netherlanders aren't aware of them either. I've discussed and illustrated the various types of signs in previous posts and how they can be used, but I'd like to break it down here and provide a brief guide to cycling signage in the Netherlands.

As impressive as the cycling infrastructure that links the entire country are the various signage systems that help you get where you want to go. It is almost impossible to get lost, except in those rare instances when a sign has been damaged or obscured (in which case, you can report the issue at this website.) 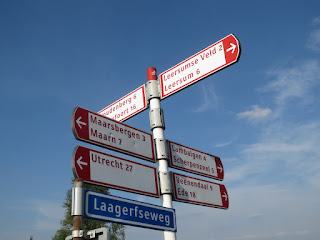 These are the ubiquitous red-bordered arrow-shaped signs seen all over. They're very handy for simply getting from point A to point B—not necessarily scenic but almost always safe and direct. Usually distances are included. Green directionals refer to greener routes that may not be as direct but are traffic-free and serene. The ones pictured below are a variation; they point to LF routes (7a, 13b, etc), which have their own signage network. 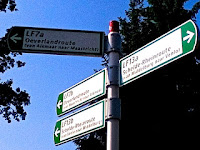 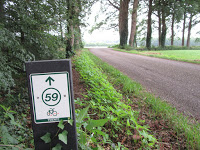 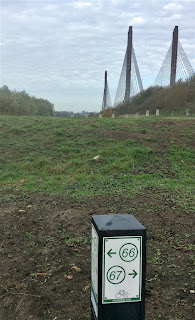 Knooppunten, which may be translated as "nodes," are numbered points which connect all the bike paths throughout the Netherlands and northern Belgium. They are not necessarily the most direct ways between points but usually the more scenic, lower traffic routes. They're ideal for planning tours, as you're almost guaranteed a scenic jaunt by following them. You can pore over knooppunt maps at home to plan your route, or simply improvise along the way. You need a knooppunt map, such as the ones pictured in my posts, to use them effectively. These maps are available in various formats. There are regional knooppunt maps, an atlas and an app.
Knooppunten are a relatively recent development on the signage scene. The system was started in northern Belgium, though the Dutch developed it more extensively. The network is morphing and expanding all the time.
If you want to get all geeky about it, you can purchase pre-printed paper strips on which you can mark all the knooppunten on your route and affix it to your handlebar, so you won't have to consult the map. No doubt these are being rendered obsolete by smartphones, for which you can naturally purchase various handlebar holders. I wouldn't go that far, hopeless boomer that I am.
Distances between knooppunten vary greatly —urban areas generally have more nodes than the countryside, and in certain extreme cases, such as the causeway between Lelystad, Flevoland and Enkhuizen, Noord-Holland, where there are no possible deviations from the route, you may pedal more than 20km between them. But ordinarily it's on the order of 5 or 6 km between knooppunten. When you're getting near the next one, you'll see a sign reading "U nadeert het knooppunt ..." though you may still have a kilometer to go.
The numbers are always accompanied by arrows. These may point left, right, up (straight ahead), or angle left or right when you need to bear in those directions. Sometimes, for example when getting on to a bridge or going through a tunnel, the arrow may take the form of a loop, indicating you need to turn around. In another frequently seen sign, the arrow takes the form of a right angle, usually indicating you need to cross a road and turn on the other side, or it may zigzag to show you need to jog left or right, then keep going in the same direction. On occasion, the instruction symbolized by the arrow is unclear and you have to make your best guess, or it may even be wrong. The fietsknoop app is an excellent resource in such cases.

Even if you don't carry any maps or apps along with you, regional maps are posted at most knooppunt locations, though not at every one. The design of both the knooppunt signs and maps may vary from one province to another. 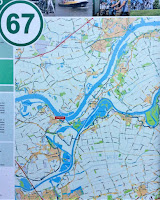 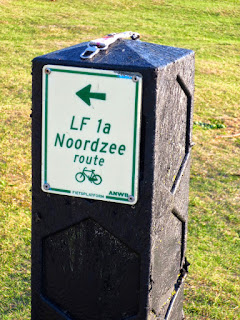 LF refers to langeafstand fietsroutes — long-distance bike routes. There are 15 or so LF routes traversing the country, covering distances of 200 to 600 km, altogether covering nearly 4,000 km. I've cycled all or part of various LF-routes, as described on this blog.
They include the North Sea route (LF-1), the Saksenroute (LF-14), which skirts the German border, and the Schelde-Rheinroute (LF-13), which follows the Schelde and Rhine rivers through the southern provinces. Some of these routes extend into Belgium, with the same numbers.
LF routes are generally scenic, and excellent tours can be planned around all or part of any of them. Some of them are being phased out, while others are currently being upgraded or transformed into thematic "icon routes," each having its own website. I'll have more to say about these as they develop.
Signs for LF routes have a standard format through the 12 Dutch provinces. LF routes predate knooppunten, and the latter are generally superimposed on the former, so you can follow either one. (In northern Belgium, the two networks are sometimes separate.) In general 'a' routes (i.e., LF 4a) have a west-east trajectory, the 'b' routes east-west. 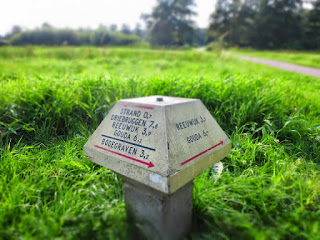 These seem to be the earliest cycling signposts, pre-dating the other networks, and though they aren't as widespread as the above versions, they often sprout up in forests. Some seem to be quite old and weathered, while others are shiny and new, so I suppose they're still being produced. I find them comforting. One can imagine the squat paddenstoel markers pointing the way through a misty wood in the distant past. They serve essentially the same function as the directional markers, but being four-sided they more efficiently cover the compass points.

Another kind of sign seen along the fietspad is linked to thematic circuits that have been
developed by the provinces or by the ANWB (Koninklijke Nederlandse Toeristenbond, or Royal Dutch Touring Club), the national touring association. Such routes might traverse a national park, or follow a series of windmills. In Friesland, there's the Elfstedenroute, or "11 Cities Route," which corresponds to the famous skaters' route that happens when it's cold enough for the waterways to freeze. I haven't actually used these signs. My sense is that they're being superseded by smartphone technology. The routes are still there but instead of using route signs, people use the knooppunten that link the route; the sequence of numbers can be accessed via the ANWB cycling app.

Another sign that comes in handy is the blue "fietspad" (bike path) sign, which may indicate which of several paths is devoted to bikes (as opposed to pedestrians, horses or cars). More often than not, other kinds of vehicles, including scooters and motorized wheelchairs, are not allowed to use fietspads, and sometimes you'll see additional signs to emphasize the point.