The autumn days got chillier as I continued my journey in stages through central Netherlands. Having skirted the rivers, I was now poised to plunge into the great forests: to the north, the Veluwe and to the west, Utrechtse Heuvelrug. I traversed the northwest corner of the former, then the northern edge of the latter as far as Hilversum. An icy wind propelled me home from there.
(original date of this entry: Nov 22, 2020)
When I arrived in Rhenen, it was raining. I descended to the river and took the Blauwe Kamer route in reverse. At the end of this lovely riverside jaunt I crossed a road and took the path to kp 31 → 11. This follows a creek (the Grift), woods on my left, another fine stretch. On the way up to kp 11, the creek widens and the landscape opens to vast flat fields of grass. I'm heading for Ede. 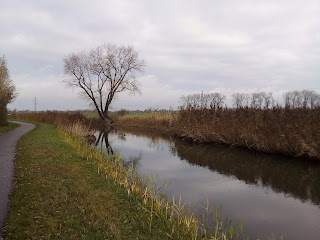 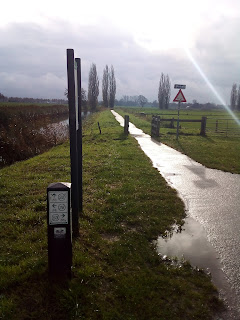 I approached the town along a succession of country lanes, past isolated farmhouses and some larger farming operations with multiple new tractors. I rode into Bennekom, the town between Ede and Wageningen, which comprise an urban zone along the western edge of the Veluwe forest.

Coming into Ede, I lost the knooppunt network and ended up climbing quite a ways north alongside a traffic-heavy road. A sign on my right declared that I'd reached the forest but I was still on the highway. I just kept going until I found a sign pointing right to Otterlo — the green way. Soon I entered the forest and all was well. But the distance to Apeldoorn was 31 km, more than I'd anticipated, and I doubted I could make it through the forest by dark. 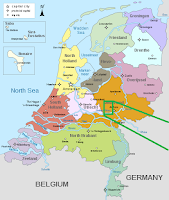 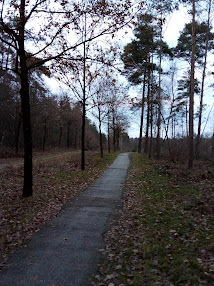 I reached the wide-open heath (kp 62) and a crossroads with plenty of fietsers and hikers on this mild November Sunday. It was fun to climb and zip down a narrow winding asphalt path through the woods and heath, though reaching high speeds one must be cautious with oncoming fietsers. About halfway to Otterlo, I struck northwest for kp 81, thus leaving the forest and following a succession of country roads, estates and horse pastures. It was almost dark when I reached kp 1. I then headed west to kp 39, turning right (north) at the first connecting thoroughfare into the town of Barneveld. I left the bike at Barneveld station, and got a local Valleilijn train to the nearest NS connection, Amersfoort.

I had left the bike at Barneveld station, where it sat under a protecting roof, and it was in good shape after a couple of weeks.

The first part of the ride was dull, up the N805 to Voorthuizen through a sterile industrial zone. From Voorthuizen I proceeded east through flatlands interspersed with suburban homes till I reached the edge of the Veluwe forest at kp 94. 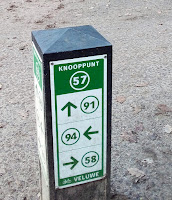 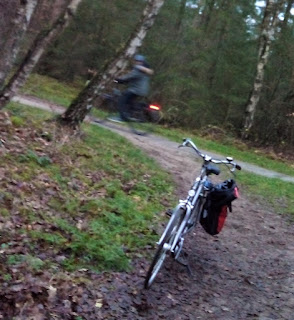 From there it was a blissful ride north through the western edge of the Veluwe — a pair of distinct forest zones called the Sprielderbosch and Leuvenumse Bos. Most of the ride was along an asphalt strip flanked by pine and bare deciduous trees, occasionally crossing a road, climbing a bit. It was chilly but not too bad—I didn't need a hat or scarf. There were a few others on the trails but I was mostly solo. The whole ride was a pleasurable workout and felt effortless. 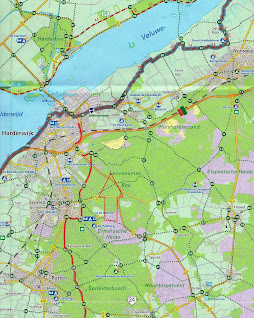 Coming into Harderwijk, I went over a major bike bridge, then flew down the ramp and into town — then made a wrong turn, taking me around the east edge rather than into the center of town. But that was alright. Now that I was finally equipped with mobile data, I could consult the map and plot my route through Harderwijk to the train station. This worked perfectly and within moments I was going down Stationstraat.
Once again, rather than putting the bike on the train, I left it parked at the station, thinking I'd start my next ride from Harderwijk. I could cut across Flevoland to Lelystad, or simply follow the LF-9 back to Almere/Amsterdam, or a combination of the two.

Weather is alright — not cold — so I decided to continue my epic journey. I had left the bike in Harderwijk. That is easy to get to: Amsterdam Muiderpoort - Amersfoort Schothorst - Harderwijk (Zwolle-bound Sprinter). Easy getaway: → kp 82 down an underpass, up through the center of this olde town and down to the waterfront. Then follow signs to kp 9, along the waterfront part of town, a pleasant ride along the wooded banks, punctuated by little "beaches." The path was fairly busy with both cyclists and dog-walkers, typical Dutch suburban scene. 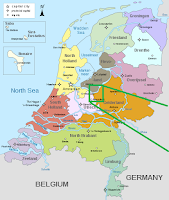 Leaving Harderwijk (→ 7), the fietspad parallels the freeway (A28) for the next 7 or 8 km. To my right the Nuldernauw, a section of the waterway that separates Flevoland from Gelderland (then Utrecht province). I have long wanted to take this route. The drone of traffic is constant but I get my own wooded corridor so I don't mind. One has to wonder where all these people are driving to on a Sunday. At Horst, I cycle over to the shore in hopes of catching a ferry to Zeewolde on Flevoland. This is on the LF-9, which appears to continue down the north bank through the woodsy zone of the Horsterwold. At the dock I find a young fisher who tells me the ferry doesn't run in the winter months. Checking the website, I see that from Nov 1 to March 1 the ferry doesn't run on weekends, otherwise it goes year-round. It costs €3.50 return. That's alright. I stop at Horst strand for lunch. There are two large sculptures of white bicycles here, which seem to function as a billboard for passing traffic.
At kp 38, the fietspad finally leaves the freeway (that is, the freeway leaves the shore) to become a solitary asphalt strip hugging the banks of the Nuldernauw, with islands of bare trees and flocks of birds swooping around. A pleasant ride, it continues this way until kp 67, where there's a bridge to Flevoland. (This could be the next ride: Amersfoort-Nijkerk and a wander round the forests of Hulkesteinse Bos  and Horsterwold, with option of returning by ferry to Ermelo.) The route continues in this fashion beyond Nijkerk to kp 52 → 51 → 50 (outside Binschoten). The polderland to my left looks rather swampy, with plenty of avian activity. By the time I reach kp 50, the sky is dimming and I make my descent through pure polder toward Amersfoort (to kp 9). It becomes a "fietsstraat" but there are more cars and scooters on the path than bikes.
Unfortunately I lost the knooppunt network here and relied on my phone to guide me. But I got confused looking for "Centrum," which referred not to the center of Amersfoort but of the northern suburb of Hoogland.  I had been wandering at least an hour when it became apparent that Amersfoort was 3-4km south of there, so it was an exhausting, though pleasant, ride to the center of town along a well-lit cycle-way. I parked the bike under a protective roof right in front of Amersfoort's substantial station. With a change at Duivendrecht, it took under an hour to get to Muiderpoort.

I took a chance and got on a train to Amersfoort, even though the Netherlands is still in lockdown mode. The train is quite busy on a Sunday afternoon. I want to get my bike finally and take it home. But now I've got the nutty idea of riding to Hilversum in the cold. It isn't far, just 24 km...

After a month of disuse, my bike was safe and sound at Amersfoort station. It was easy to get on the LF-9. I just went right (west) and soon I reached a turnoff for kp 60. This route zigzagged through suburban neighborhoods, then entered the Utrechtse Heuvelrug, the great forest that stretches northwest to the city of Utrecht. This northern section of the park was a pleasant ride through rolling terrain, with pine forest edging sandy expanses. Despite my doubts about riding in the chilly, overcast weather, I was definitely enjoying this. People were out in droves this Sunday, including many groups of strollers — not unlike Vondelpark in Amsterdam yesterday where the crowds were so thick it was a challenge to weave through them, especially with oncoming cyclists not yielding an inch.

It appeared I had emerged from the Utrechtse Heuvelrug, crossed a road (N-413), then continued through more forest. I was skirting the southwest side of Soest. (I had been here before on my way to Den Dolder and I recognized the sections of dunes.)
As dusk approached, from kp 97 I followed a directional sign to Hilversum. This turned out to be the best part of the trip, a peaceful ride on a dirt trail through Lage Vuursche forest. First I went through the touristy village of the same name. People were out and a few cafes were providing takeout refreshments. The general festivity both here and in Vondelpark seems to belie the sense of dread transmitted by the nightly news. The last bit to Hilversum was a peaceful stretch of forest, and I arrived in the city just as dusk fell. Parked my bike in the uncovered lot in front of the train station. Next time I can cycle back to Amsterdam.

Cold day. Still, it wasn't supposed to rain and the wind was blowing west. And my beloved Batavus Intermezzo had been sitting in front of Hilversum station for weeks. Hilversum was one of the places struck by waves of vandalism following the implementation of a curfew, and I worried that they'd raided the open-air lot at the station. So after Saturday shopping, I got a train to Hilversum, half an hour ride. I had forgotten where I'd parked the bike so had to look around awhile. There it was and — oh no, the saddle was missing. And it so happened I really liked that saddle. It was the first time anything like this had happened, though I'd parked the bike at a number of stations. Well, the bike was still there anyway.
I took it down the bike tunnel that runs below the station and found the fietsenstalling/bike shop, fortunately open at lockdown time. The old guy working there said he couldn't put on a new saddle because they'd also snatched the fitting it was attached to. He suggested I try the bike shop across the street. This was open too, and the large showroom was empty. A guy in the back was repairing some bikes. He said he could replace the seat for me, pick one out. I got one that sort of resembled the previous one. It cost €30, but he tacked on another 22 to replace the post and fitting.
It doesn't take long to leave the urbanization of Hilversum and enter the forest (to kp 11) — the Conversbos —and thereon it's all forest. Despite the chill, there were plenty of strollers and dog-walkers out. It continued this way to kp 10 → 8. A lovely ride and the multiple sweaters and jackets I wore effectively insulated me against the cold (around 3-4 C). I proceeded through the Ankeveensche plassen, a great slender dirt trail alongside a canal —even this had its share of hikers— then the Spiegelplas, a route I've taken multiple times but remains quite attractive.
At kp 39, an isolated wooden bridge, I headed north to kp 40, then followed the broad Vecht river northeast and around the bend west to Weesp (kp 46 → 47 → 45). Across the Rijkanaal to Driemond and home, the wind pushing me west.
This was the conclusion to a journey that started in Den Bosch two months previous and took me to Zaltbommel, Tiel, Rhenen, Barneveld, Harderwijk, Amersfoort and Hilversum.