This route strikes northeast of Arnhem along the IJssel river (which continues on to Zutphen) and crosses a lake, the Giesplas, via two ferries and several splendidly remote peninsulas. It continues to skirt the river as far as the storybook village of Doesburg, then follows a beautifully serene curve of the river to the town of Dieren via yet another ferry. This puts you at the edge of the Veluwezoom national park, but instead of climbing into the vast forest, I skirted the railroad west back to Arnhem in time to catch a massive celebration on the anniversary of the Battle of Arnhem.

(original date of this entry Sept 20, 2019)
Last day for a keuzedag (free ride day on NS rail) and the weather happens to be perfect for a bike ride. So where to go? Arbitrarily I chose Arnhem--slightly warmer than Amsterdam).

It didn't take long to get to Arnhem. Outside the hulking station there were signs for an event. Today, 20 Sept, Arnhem commemorates the Battle of Arnhem, 75 years ago! (1944) Some kind of mega-event by the famous Bridge Too Far tonight.

I headed east toward Velp. An urban landscape but the fietspad winds through it seamlessly. Coming into Velp I find myself behind a cycling caravan of schoolkids, all wearing yellow vests (not a protest). As they're impossible to pass I follow them for a bit. Seeing the procession of yellow vests ahead on a crisp early fall day fills me with elation. Yes, this is where I belong.

The urbanization continues eastward as a few estate-type houses pop up. Finally I encounter a big green field, then a broad tree-lined lane to find the Landgoed Biljoen ("niet te bezoeken"). The yellow-vested kids are parked there. Around the bend is a little lake with a few ducks where I have a sandwich. Here the fietstocht proper begins. 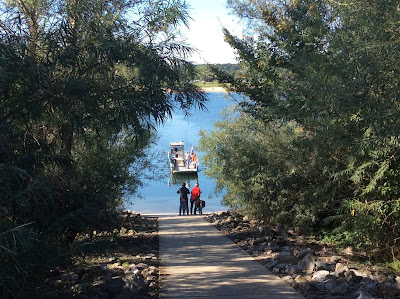 Reaching kp 80 on the Giesplas — a sort of appendage of the IJssel river — I see there is a little ferry that only functions till 1 October, permitting one to do a circuit of the lake, formerly ringed by farmsteads, now given over to recreation. There had also been a stone factory. The area was cut off with construction of a highway. Rounding the lake on the northeast side I come to an even smaller ferry, which bridges a gap between peninsulas on the north side (toward kp 24 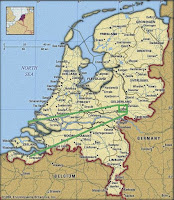 ). This too runs only till 1 Oct, so I'm fortunate to catch it, season's end. At this point I chose to follow the Haavikerwaard route with "pastoral IJssel landscapes," as described in my guidebook, followed by a slice of the Nationaal Park Veluwezoom. 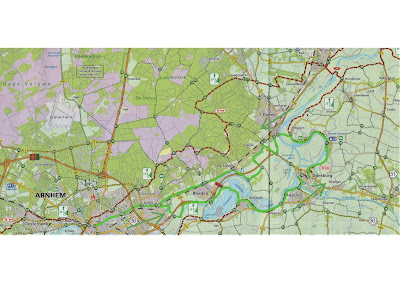 Now at a fine outlook/peninsula facing the IJssel, or perhaps the Oude IJssel, as Doesburg is at the confluence of these two rivers. A sign explains that the Oude IJssel is a tributary of the IJssel that branches east to Germany (where it's called the Issel), via Doetinchem. So this journey might be seen as an extension of either of two previous journeys: along the IJssel from Deventer-Zwolle-Kampen, or from Winterswijk to Doetinchem. 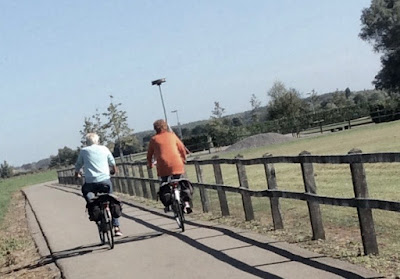 The trail from the Giesplas reaches the south bank of the IJssel at Giesbeek, then follows the river as it winds its way to Doesburg (kp 38 - 37 -36), alternating between a riverside trail and a busy roadway. Doesburg, where I sit now most pleasantly by the river, has an industrial heritage and a Martinitoren (like Groningen). The route now continues up the IJssel basin, then loops around west to the Veluwezoom. Perfect (so far).


I'm now between De Steeg and Rheden (kp 83 - 85) which is just a road but I managed to find a nice spot just off it, the entrance to a residential zone. It has a bench at the top of a lawn focusing on a sculpture of two embracing figures. At first I thought they were lovers but now I see it's a mother and daughter with a small dog at their heels.

Doesburg was pretty in that inaccessible uninteresting way that old Dutch towns are, an affluent void, another case of terminal quaintness. But I guess I was seeing it at its best in the late summer glow, the cafes full if uninviting. They were gearing up for some event, stands being set up along the river.

The next bit, kp 35 - 01 - 52, from Doesburg to Dieren, was pretty fabulous. Generally overlooking the IJssel on my left as it wound north, like a reflecting band of bronze, then west. (I could've continued north along the IJssel to Zutphen.) The trail (LF-3) was little used. Between the meadowish banks of the bronze IJssel and vast mostly chopped up fields—triangular swaths of tall cornstalks standing alone—I was following three old women; one turned off lustily through a field. It was a long blissful ride. At the end of it was a T. I turned left toward kp 90 and found yet another ferry, this one plying shallow choppy waters to Dieren. I had been moving fast, concerned that I might arrive late for the last ferry. It was after 4, and the ferries at the Giesplas stopped at 4 (in mid-summer at 8). But the ferry to Dieren ran till 7 pm, apparently more used, and it carried cars—though on the way over I shared it with just one car and one little girl, seen off perhaps by her aunt and met at the other side by her mom (or vice-versa).

Outside Dieren I ran into a major road and some confusion due to map discrepancies. I was headed, according to the route map, to kp 99. But at the intersection I found signs only to kp 14 and 10. After a long wait to cross the road I realized 14 went east. I was going west, but took the busy road north to kp 10, though I got my own little road to reach it. At 10 I found the turnoff west to 99 and escaped the racket. Now I would make my way north to the Veluwe forest. But by the time I reached De Steeg I was knackered and the sun was setting and I hadn't the ganas to climb up to the forest. Another time for sure. Also, I wanted to catch at least a bit of the historic battle of Arnhem commemoration.


I thought about getting on the train at Rheden—it was my keuzedag—but instead rode the 15km to Arnhem along a busy thoroughfare. The ride was fast and smooth. Somehow I found my way to the precise focus of the event: the Airborne Plaza.

[Another option for a ride would be Zutphen to Arnhem via the IJssel, then the Veluwezoom.]

Clearly this was an occasion of great importance to Arnhem. People were ringed around the top of the subterranean monument viz cycling rotunda—which I marveled at on previous visits—10-12 people thick going all the way round the plaza. It was impossible to penetrate the crowd and I couldn't see anything, though judging from the telecast on two screens, there wasn't much happening. A Dutch politician or diplomat introduced, in both Dutch and accented British English, a series of superannuated veterans of different nationalities who must've survived the carnage somehow. Some of them were driven up in golf carts. The crowd applauded profusely. Some ambassadors, including US ambassador Hoekstra and a pair of German diplomats laid wreaths for the fallen. More profuse applause. People seemed genuinely moved by the commemoration.

When it was over the crowd descended to the street below and I took a walk in the direction of the John Frostburg bridge, but that was closed off. From up there I had a view of the Nederrijn. A huge stage was set up on the opposite bank. I could also see more throngs on the other side of the street where the war veterans were filing back down from the plaza in their little golf carts. More profuse applause. I walked down to the street along with the throngs and tried to move toward the river. But it was a challenge. Finally I made it down to the river. As at the plaza the crowds formed an impenetrable band by the riverbank. Some kind of viewing pavilions were set up along the bank but these seemed inaccessible and had the effect of blocking the view to those not fortunate enough to get into them. From the distant stage I could hear the da-da-da-dom of Beethoven's 5th. Hmm, so they chose something by a German for the occasion. Choppers hovered overhead, casting rays of light into the darkness, the point being I guess to recreate the atmosphere of the battle. In fact it did occur to me that a sniper could set off a powder keg of mayhem amid such a throng of onlookers. It lent the scene an air of menace. Anyway, the historic aspect of the event was lost on me, even though I'd seen A Bridge Too Far.