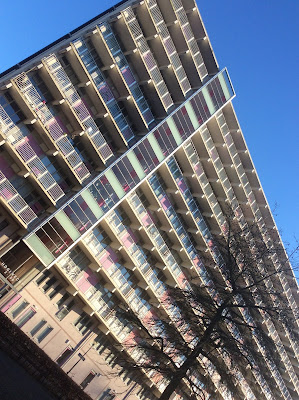 Lockdown time but it's ok to take a bike ride. This is one of a series of tours I took in March and April from a guidebook put out by the Commissie voor Welstand en Monumenten (Commission for Well-Being and Monuments). The commission reviews architectural proposals throughout Amsterdam, whether renovations of existing structures or new buildings. They assess each project to determine if it fits into the existing architectural context and also reflects the historical legacy of the neighborhood in some way.

The tour, entitled "Van Oud-Zuid naar Zuidoost," gives the "two faces of the South." In the introduction, it says it takes you through distinct forms of development, each of which can be linked to a distinct era. They reflect different notions about how places should be built and rebuilt. On the one hand the Zuidas is the "show horse" of the city, where a new elite put up residences between banks and lawyers offices. On the other is De Bijlmer, a working-class zone where 140 nationalities dwell. Yet De Bijlmer also has a special form of development, as was strikingly clear to me when I lived there from 2010-12 (before some of the places in the guidebook were built), and remains clear when I revisit it. I didn't recall the zone being so black but it must have been. Yet "rough" as it's often made out to be, it remains harmonious and laced with parks.

The intro says something about how the original desire to separate living, working, recreation and traffic did not work well and the renewal of the 1990s sought to merge them.

Yesterday I did most of the first part, the area west of Beatrixpark and Zuidas. Today I covered the second half of the tour, Zuidoost. 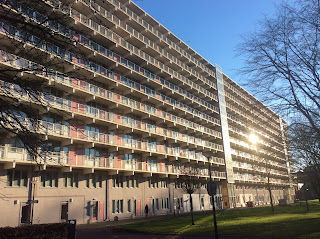 To get there I took an unaccustomed route to Zuidoost, going through Frankendael park to Nobelweg, then attempting to parallel the S112 (Gooiseweg). I went through the Darwinplantsoen, obviously meant for pedestrians, including many dog walkers out on this sunny if chilly and windy day. It definitely tasted like spring. I then got on a fietspad alongside the Rozenburglaan, today lousy with roaring motorcycles.  I arrived at the highway interchange where my customary Duivendrecht canal (or Weespertrekvaart) route comes up and goes over a bridge, a journey documented in a post of 2011.

Checking the iPad I saw that it was more or less a straight line east from there to the first stop on the itinerary, World of Food. The fietspad rolled sinuously through parks, along canals, and I marveled once again at how clever these Dutch are. I stopped in an office park next to a hotel shaped like a giant A-frame, the Via. It was a nondescript zone but I could sit on a bench and take the sun, protected from the wind and read.

The World of Food was a bit further up, on the Develstein, by a highway interchange. One of the "international" foods on offer here was McD's. But no one was going inside it; typically service was via a drive-up window and several cars were lined up for a bag of shitburgers.


The World of Food, a strange food court that had been fashioned out of an old parking garage. I was surprised to find that some of the kitchens were open during the lockdown, including a Chinese and Turkish one. I felt a sense of danger as I entered, as if just wandering through the drafty interior I was wading through a toxic haze. I sat outside at one of a line of picnic tables in the sun. Several of these were occupied by groups of youngsters who made not the slightest attempt to keep their distance from one another. At what point will they start arresting people for such behavior?

What is somewhat ironic about The World of Food is that its original function was to hold the cars which were not permitted to go into the residential zone. But those later became the "unsafe places." When they renewed De Bijlmer to a less doctrinaire state, many of these saw the wrecking ball. Thus was a parking garage repurposed and refurbished as a bit of cultural heritage. Will the same be done in the USA when the gas runs out?

"Thanks to the parking ramps, all the levels are connected." I found the interior rather graceless and grim, with its concrete steps and stalls, less inviting than, say, the central market of Quetzaltenango, Guatemala. I got out of there quick. The guide says there is a terrace on the roof but I didn't investigate.


From the World of Food, I found myself in an unusual situation: no bike paths. So the parking garage that had been installed to remove autos from public life had somehow transformed into a symbol of auto gluttony. I descended a gravel path to a sharp bend and reached a two-lane path at the bottom. Following the squiggly green line on the map, I found a big pond and zigzagged in an eastern direction along the Passtukkenpad. I vaguely recognized the "yellow wings" sculpture in the center of the pond. I was in familiar territory. I passed a behemoth apartment block (which appears as a hexagon on the map) and then I was riding along the rear end of the shopping center beside Ganzenhoef metro, my old stomping ground. I continued past the metro to the restful woodsy trail that I used to tak to reach my home on 's-Gravendijkdreef. I go past the garage where on New Year's Eve 2011, I nervously watched a barrage of fireworks in deserted surroundings, then took the snaky trail through the swamps that backed my former residence. Off to the right was the solitary statue of a hefty Surinamese woman, then I was skirting the neat row of red brick homes along Lontarpalmstraat. I took a right and reached the next "sight" on the route: Kleiburg.

On the map it appears as a giant zigzag. The massive apartment block stands next to the Metro tracks and a running track. A soccer match is going on on a fenced court. Almost all of the players are black. In the CWM guidebook such apartment blocks are called "honinggraat flats," i.e. honeycomb flats. Utopically planned, they somehow went amiss and De Bijlmer became a "problem neighborhood." The zone was "renewed" in the 1990s. The flats were knocked down or drastically adjusted. Only one was left in its original state: Kleiburg. It was slated to be demolished but resistance arose: "Het is een waard stuk erfgoed." A group of architectural designers bought it from developer Rochdale for 1 euro. The plan was to renovated the shell and the flats sold from €66,000 apiece. They were all sold.


I was next to head south, looking for the Kazerne Anton. At first I headed in the wrong direction and was going through a sort of park with long stone tables and benches. Then I headed in the direction of the highway (A9). I reached it but couldn't go through. I followed a narrow gravel path east behind a row of houses. Before long I found the Nellestein path, and this climbed a ramp and went over a barren tract which seemed under construction before tunneling under the A9. On the other side I was a the Nellestein, the little housing complex on the west side of Gaasperplas park. I'd definitely been here before. I followed the Gaasperdammerpad, not to the park but west toward the S112. A before reaching it I turned right, back toward the highway, and had to navigate a service road behind some apartments. Emerging onto the Langbroekdreef (no bike path) I spotted it. The Kazerne Anton was a solitary firehouse on a little hill. It look especially interesting, a low oblong structure with white, gray and red bands of brick. It seemed deserted and, standing next to a highway interchange, hardly a welcoming spot. Still, I read about it: "A sturdy, recognizable building with a striking striped facade in black, white and gray bricks." The CWM was not pleased with the design, which it found rather pedestrian. They wanted something more "iconic."

Now I had to get back underneath the A9 to head north. But how?