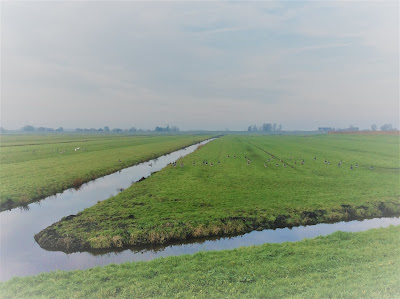 A roll through the polderland. Starting at Purmerend, north of Amsterdam, this loop traces the former triangular island known as the Zeevang, land of ancient pastures laced with a filigree of slender canals. The west side follows the bank of the Markermeer south along a high dike that takes in broad swaths of the stark, serene landscape, ending up at the storybook town of Edam. From there it's smooth sailing along a broad canal, the Purmeringvaart, back to the start point.


(original date of this entry: Nov 24, 2019)
Sunday ride. One of the myriad polder jaunts between Hoorn and Purmerend.


» 28
Along this backdoor route, a number of apartment blocks backed up on the canal, some of them massive, not unlike what can be found in Amsterdam Zuid-Oost, which made me realize that Purmerend is another bedroom community.

» 4 » 9
Crossed over the canal to enter the quaint community of Kwadijk. Followed a narrow road populated by cyclists, dog walkers and a few cars. The houses were generally squat affairs with neat little gardens. I was glad to leave it behind and turn north along a tree-lined canal, table-flat sheep pastures on my left. This was polderland. At the community of Hobrede I crossed the canal (the Beemsteringvaart) and continued along the east bank. The fields to my right soggy and green, tracts of mud and manure cut through by long straight ditches. As the guidebook explains, the polders to the west and south — De Beemster and De Purmer — were waterlogged in the past, so I was skirting what was once an island, De Zeevang, historically similar to Urk in Flevoland. Astute observers should be able to detect a difference in the terrain, the more recently filled-in polders more uniformly parceled out, the former island like a jigsaw of thin horizontal parcels outlined by ditches. Now the green expanses were dotted with ducks and geese, rows of trees in the distance. 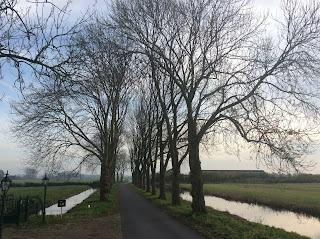 » 11 » 10 » 33 » 83 » 63
The route detours into the starkly empty polder, then comes into the drab community of Oosthuizen with the typical brown-beige brick housing. About 3km beyond, outside Beets, I hit the highway (A7) though don't actually see it above a wall, skirt the A7 for a bit, then angle east to skirt the Korsloot, crossing railroad tracks, and finally reaching the banks of the Markermeer at Schardam, whose "locks have played an important role in the water management of Noord-Holland since the 14th century." All I see is a row of yacht masts in the distance. I consider heading a short distance north to Hoorn, where I could catch the train back to Amsterdam, instead keep to the route and follow the LF21 south. This is not so vivid a ride as further south, as the trail skirts the base of the dyke rather than going on top of it. Along the way there are staircases so you can climb up and get views of the Markermeer, the southern portion of the IJsselmeer, which separates Noord-Holland from Flevoland, and westward the stark landscape of the polder. At Etenheim a solitary windmill stands upon the empty horizon fronted by striated sheep-grazed pastures.

» 64 » 97 » 95 »  94 » 28
Toward dusk I am coming into Edam along a canal, and I recall that it was one of the first towns I saw in Holland, on a cycling journey with my brother and niece to Texel. Also that I came up here with Steve James when he performed at the Café Harmonie, which I went by on the same canal. The town is quaint and pretty and I'm glad to get an overview from the cycle path which threads right through it to kp 95. Then, as the sun fades I enjoy a serene ride along the eastern extension of the Purmeringvaart, a broad waterway between sections of sprawling polderlands. This bends south and heads straight into Purmerend. Again I pass the quaint bridge to Kwadijk. Further down I take a wooden bridge over it toward kp 25 but somehow miss the outlying Purmerend Overwhere station  and continue into the center of town, where due to lack of signage I wander around awhile till I locate the station. Purmerend has an American suburban feel. The Albert Heijn XL and Lidl are off auto thoroughfares with big parking lots. Still, they are flanked by bike paths for those who prefer to pedal. 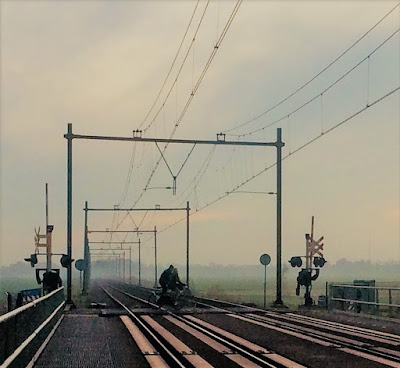