Where I am now: at the bottom of a field near Meldert, west of Hoegaarden. From Leen's place near Korbeek-Lo (east of Leuven), I headed south and over the A3/E40 to reach Neervelp, where I picked up the LF-6 east. I could've taken a more direct route to Sint-Truiden via knooppunten  ("LF is passé," said Luc in Boeschout), but I suspect the LF is more scenic and traffic-free. Leen Rosseel didn't know. Though she's lived here 37 years and is an avid cyclist and walker, she never took it. So far the route has gone through dull deserted villages and along roads with trucks, but just outside Meldert a strip of asphalt branches off through a field and now it's a truly rural scene. Signage is good and here again the LF often follows its own route, independent of the knooppunten. I haven't seen a single cyclist; I guess the LF is passé. The day is sunny, rather cool and quite windy though the wind is at my back.


(original date of this entry: Aug 24, 2018)
Just crossed over the A3/E40 (again) east of Outgaarden and south of Tienen, the major city in this area though I won't see it; the LF-6 runs south of Tienen. Not only is there the highway but also the railroad, though this is not shown in my fiets atlas. Unlike at other highway overpasses, I didn't have to climb to this one; it just appeared on my left, a sturdy, rusty bridge, the deathly roar of the road below. On the other side of the bridge I find a picnic table shaded by sycamores. The day and the tour have turned out splendid. A blissful ride through fields atop a plateau with a gentle roll, the wind pushing me forward under sunny skies. I reach Hoegaarden, where they make the beer, a substantial town with a few impressive old brick buildings and a biercafe or two. Next its little sister, Outgaarden, then more fields and the highway. It's good that I took the trouble to list the knooppunten corresponding to the LF. Where the LF signs don't appear, I follow the knooppunten, and that's worked out fine.

According to Lannoo's, Tienen is in Vlaams-Brabant. South of this, where I now cycle, is Brabants Haspengouw, where they speak Luiks Haspengouw, an intensely agricultural zone of wheat and sugar beets.

I better keep moving: storm clouds are bunching up on the horizon. 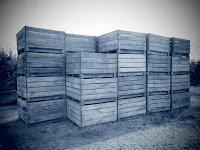 Despite my concerns about distance and the topography of the region, I am really flying, propelled by a hefty tailwind and some downhill stretches down broad lanes through vast fields where I reach perilous speeds. Then a sudden turn south and I climb for a bit, then continue to zoom eastward. I must be near Laar (kp 88) which means I've almost reached my destination.

The ride continued speedy and bracing. I knew I was coming into Limburg territory when I began to see a profusion of apple and pear trees. Also stacks of giant crates, wooden or plastic. I wondered who picked all those fruit. Then I noticed a series of day packs and shopping bags leaning against the fence, then heard foreign voices and could see a few day laborers, Romanians or Polish perhaps. 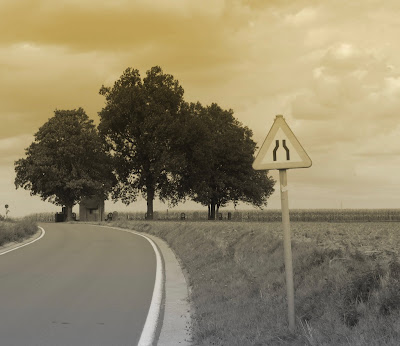 Before long I noticed 3-digit knooppunten and I was just outside Sint-Truiden. I had made good time. Too good in fact. I said I'd show up at my Vrienden op de Fiets around 7, and it was a little after 4. I found a bench in a park-like strip on the north side of town. A sign warned against drinking alcoholic beverages here. The first person I noticed was an allochton with a can of beer. Some Moroccan boys were sitting on the grass. It wasn't just allochtonen. There were various blonde Belgians as well. But they didn't linger--they were on their way somewhere.

I made myself a tuna sandwich and then checked my email (free ambient wifi in Sint-Truiden). Briggite Bruggers in Nijmegen told me she had no room on Monday night. I then sent off 3 more Vrienden op de Fiets requests to Nijmegen and got one acceptance--from a certain Mirjam Rodolphus.

My first impression of Sint-Truiden is that it's a noisy town full of poseurs driving around to flaunt their affluence. The cafés are filled with overweight cigarette-smoking loudmouths, the promenades with families strolling around. As usual I may as well be from Pluto. On the other hand it is lively. Well, there's a kermis going on. The kids--not just white kids but immigrants as well--crowd the rides and scream with glee.

My Vrienden op de Fiets hosts in Sint-Truiden, Marisse and Johan, were quite representative of the town's population. Big cheerful middle-class people without the slightest interest in anything ''alternative." She handles the kitchen and ministers to the guest, he sits in front of the TV to get filled in on this week's disaster--now it's floods in Hawaii--and fiddles with his tablet. There's an RV in the yard and they've got a border collie--the second one I've seen this trip. They are the only VoF'ers in Sint-Truiden though, and I'm glad they're here.  Continued...