Today, Monday, the weather is splendid and I'm doing the Schilde route: "fietsen door de groene gemeenten rond Antwerpen." This will take me through the towns of Schilde, Schoten, Brasschat and Willekom. Right off the bat (kp 3 → 15) I'm going through the large park called the Rivierenhof, with fields, gardens, woods, a lake with swans, acorns dropping, and a small castle. A fair number of fietsers out to enjoy the weather. It is as delightful as anything Holland has to offer.
(original date of this entry: Aug 21, 2017)
I'm glad to be looking at Antwerp from a different perspective. Previously I focused on the center, now I'm looking at the outliers. The city's cultural mix remains evident here: plenty of Islamic folk plus orthodox Jews, who can be seen riding bikes, shopping in the supermarket and praying at park benches.

After the Rivierenhof, I snaked my way up to the Albertkanaal, past Wijnegem, then hugged the canal east till kp 29. Then it was a lengthy ride alternating between suburban estates and forest to kp 25, southern start point of the route, at Schilde. 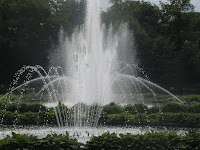 In Brasschat Forest, north of Schoten. A highly varied pageant of characters move through this confluence, marked by a pillar at kp 32. Serious helmeted cyclists—male and female—dog walking couple, elderly cycling couples, little families out for a stroll. Now a boy in a hoodie sits on the pedastal of a pillar—the Graaf Reusens Obelisk, according to the authors of Fietsgids Antwerpen. Reusens, who had connections in the Vatican, was the owner of the estate till 1907. It's an attractive scene and deepens my interest in Belgium.

At the top of Brasschat forest is a castle and low-key terrace café. Then I enter the Inslag, an old peat-mining zone, which consists of long corridors of stately elms. The path is hard sand, paved in spots. The stream that runs through here, De Miksebeek, is supposedly loaded with amphibians.

Then, on the way to kp 41, I cross a road and continue along a narrow strand of dirt that skirts a brook capped with pea-green detritus where I spotted exotic ducks. Finally at kp 41 I hit the grand Kanaal Dessel-Schoten, where I now sit scribbling at a picnic table. Cyclists of all stripes pass now and then. It is now cloudy, a bit cool and the air is still.

It's a long ride but a consistently interesting one. As in Holland, the landscape is a patchwork of towns (with lots of traffic) and forests but here it seems there is more of the latter. And despite my previous assessments, the knooppunt network is highly functional, providing guidance at every corner or junction. It's easy to keep moving. The cycling guide seems a bit out of date as some knooppunten are missing.

I never saw the Great Castle of 's-Gravenwezel, but the trail from Willekom to Schilde—the final stretch of the tour—was a woodsy idyll, leafy aromas carried by the cool air of the forest, plying a dolomite path alongside a still brook with the occasional WWII bunker.

Below Schilde I hit the the big canal again—the Albertkanaal—and retraced my path to kp 29 → 24 with a series of hulking boats moored to the wharf. Then went past the arched bridge (kp 24) over which I'd come. At kp 16 I climbed to go over an intersecting canal–the Dessel-Turnhout, where a freighter was making a sharp turn–then at kp 30 climbed further to go over another bridge (toward kp 3). This took me through the western part of Wijnegem, i.e. east Antwerp, and soon I was back at the entrance to the Rivierenhof.

Going west down the Plantin en Moretuslei I spotted "Chickenphone" which now, at 10 pm, seemed a good option, as the bistros on Dageraadplaats would be cleaning up their kitchens. I got a "chickenphone salad,"  took it to the Dageraadplaats where the terraces were now boisterous. Strung above the enchanting plaza was the same net of starlights that I recall from my last visit three years ago. A couple of pickup basketball games were going on at the two courts on the east side of the square. I took one of the broad stately benches by the Café Tranquilo, on the opposite side of which a group of Moroccan men congregated as they might in Rabat, and enjoyed my chicken salad enhanced with a half liter of Bordeaux wine. I felt like a hobo. Continued ... 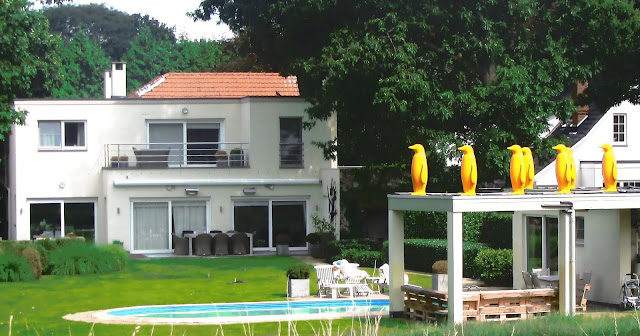